All eyes were on the St. Thomas Aquinas Raiders heading into this game. Not only are they the #1 ranked high school team in the nation, but they had accumulated a 31 game winning streak. The last team to defeat the Raiders was the Deerfield Beach Bucks and the Bucks hoped this year would be their year. 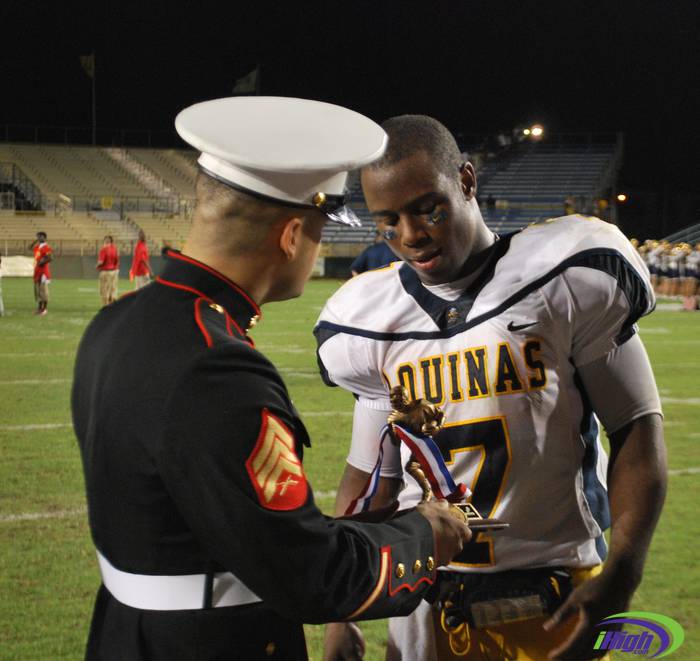 J.D. Foureau is a three-year varsity starter for Deerfield and carries a 4.0 GPA. He is currently enrolled in the International Baccalaureate program at DBHS. J.D. is the 2009 team captain and has been the Miami Herald Player of the Week. Upon graduation he would like to continue his education as a Gator at the University of Florida. He was escorted by Dominique Benoit. Reynaldo Kirton is a senior for St. Thomas and carries a 4.592 grade point average. He is a member of the National Honor Society and the track team. He is pictured with his parents, Raymond and Bonita. Ryan Becker was a quarterback for St. Thomas Aquinas from 2005-2008. In 2008, he accounted for 30 touchdowns and was 125 for 192 through the air. That same year, against Deerfield Beach, he was responsible for 183 yards, two touchdowns and a near-perfect 9 for 11 completions. Ryan currently plays for the Florida State Seminoles. Joshua Philpart was a wide receiver during his time at Deerfield Beach, playing in the Deerfield-St. Thomas rivalry for four years. In 2007, he led the Bucks to a 35-33 last second victory. Josh had 10 receptions in that game for 165 yards and one touchdown, and his catch in the fourth quarter set up the game-winning field goal. He is now the starting wide receiver for Jacksonville University. Josh’s grandmother, Flo Philpart, accepted the award on his behalf.

The Rivalry Series game began with Sgt Kean and Sgt Rocha presenting the Scholar Athlete Plaques to two well deserving seniors, Reynaldo Kirton and JD Foureau. The parents and coaches of the athletes thanked the Marines for their sponsorship as the presentation ended and the athletes returned to their teams. After the presentation and coin toss the Raiders chose to receive and the game began. The Raider's offense usually shines from the beginning of the game to the end, but with an early injury of their starting quarterback, the Raider defense had to step up. Deerfield Beach capitalized on the lackluster Raider offense holding St. Thomas to a 35 yard field goal on its opening drive. The Bucks only allowed the Raiders to score ten points during the first half, a season low for Aquinas. By the end of the second quarter the Raider defense had continued to shut the Bucks down and the teams left the field with the score of 10-0. Ryan Becker and Josh Philpart were honored during the halftime Hall of Fame presentations. Both inductees are college football players and were unable to attend due to commitments. Sgt Kean and Sgt Rocha presented the Hall of Fame trophies to the family of Josh Philpart and to the St. Thomas Aquinas administration. The teams returned to the field and the Raiders continued to lead the game. James White, later named the USMC sponsored Rivalry Series MVP, was the shining star on the offense with 16 carries for 127 yards. The Bucks just could not stop Aquinas during the second half and the Raiders went on to win the game 27-0 with their now 32 game winning streaks intact. Sgt Rocha presented the game MVP to the #7 James White as the Raiders took a knee in their end zone. Immediately after, Sgt Kean presented the Championship Trophy to the Aquinas team captains. The team celebrated their win with their Rivalry Series Trophy and hats and Raiders Coaches graciously thanked the Marines for their service and sponsorship throughout the night.