A battle across state lines, Bluefield vs. Graham has been one of the most heated rivalries in high school football for decades. The series dates back all the way to 1911 and is always a hotly contested battle.

Despite the rivalry, the two communities always come together for events surrounding the game in a show of unity. This year, the beavers and the G-men will play while honoring the loss of a beloved player, Lil’ Tony Webster. The Beaver’s will be retiring the number 5 jersey in memory of Lil’ Tony who tragically passed away from an aneurysm while lifting weights. 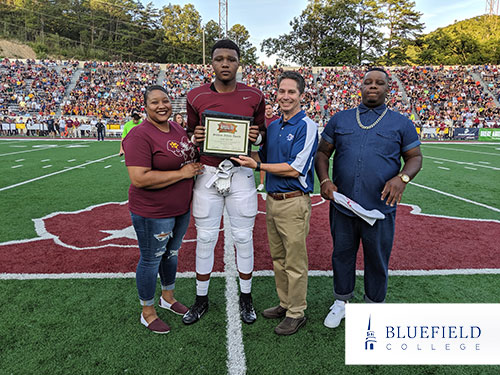 Sean is a three-year letterman of football and basketball. He was named to the 2017 AA All-State First-Team defense. Sean is the number three ranked football player in the state and a member of the Bluefield High leadership team. He plans to attend college on a football scholarship and pursue a degree in sports management or finance.

This year's match-up was a great one, as both the Beavers and the G Men had top talent. The game saw several standout moments, including an 80 yard touch down run by senior Bluefield Running Back JJ Davis. In the end, Bluefield came out ahead, leaving the game 41-27, a great tribute to Lil' Tony.